We’re releasing this SDK early to gain feedback from the developer community about the future of our Android SDKs. Please file feedback about missing issues or bugs over at our issue tracker, making sure you search for existing issues and adding your voice to those rather than duplicating.

The Spotify App Remote SDK allows your application to interact with the Spotify app running in the background as a service. The capabilities of this SDK include getting metadata for the currently playing track and context, issuing basic playback commands and initiating playback of tracks. 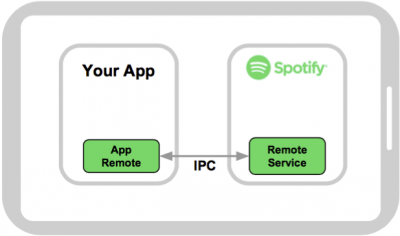 Note: While certain playback controls work offline and playback can happen offline for offlined content, apps cannot connect and start communicating with Spotify unless there is an internet connection

The download package includes comprehensive Javadoc documentation of all API classes in the docs folder.

Some of the models in the Spotify App Remote SDK are

It could answer the following questions

Get metadata like the title of the current context that is playing - such as an album or a playlist.

Think of it as an interface to the Spotify app that lets you control some aspects of the app, query for the data, and subscribe to the events. It exposes set of API like PlayerApi and ImagesApi. You should use it as en entry point to all your interactions with the Spotify app.

Is a component that lets you receive an instance of SpotifyAppRemote.

Send playback related commands such as:

Get user-related data and perform actions such as:

Control on what device the Spotify app should be playing music

In order to use the Spotify App Remote SDK, your application will need to get user’s permission to control playback remotely first. This can be done in two ways:

Note: The Spotify Android app must be installed on the user’s device in order for the Spotify App Remote SDK to work. Please see the “Installing Spotify” section of the Content Linking guide on how to direct users to download Spotify.

Note that by using Spotify developer tools, you accept our Developer Terms of Use.